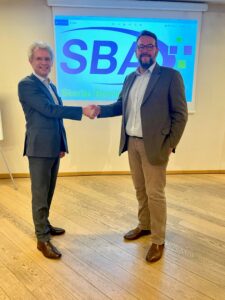 Mr Hyvernat who is CEO of SBA member Sterimed, has been a director of the SBA board since 2012. He thanked the other directors for their support in electing him for the Chair role and particularly Mr Wagner (SBA member DuPont) for everything he had done during his 5 years as Chair.

Mr Hyvernat spoke of the tremendous growth of the SBA not only in the time since he joined in 2012, but also in the near 30 years since it was founded in 1992. He felt that the continued growth and desire of companies to be part of the SBA showed the importance of the work the association does. He also spoke of his desire to continue the work started during the recent pandemic period. During this time, the SBA initiated new projects and increased communication to support both members and healthcare professionals. It also lobbied both the EU Commission and local governments to ensure that the industry was recognised as Essential Operations and supply lines remained open. The problems suffered by all during the pandemic underlined the need for the SBA to continue to adapt to the changing situation.

Mr Hyvernat spoke of the recent survey which was instigated to ensure that all members were able to contribute to the development of the future strategy of the association. He looked forward to working with the Director General, the Board and other members of the strategy project team to implement the plan and prepare the association for the next 30 years.

The SBA Director general, Patrick Sparkes welcomed Mr Hyvernat. He said that with Mr Hyvernat’s 9 years of experience as a director, the other board members felt that he had demonstrated his commitment to the association, and they looked forward to working with him. Mr Sparkes also thanked Mr Wagner for his support since he took over as DG, reminding the members of the key projects that had been achieved during his term.

Mr Wagner will remain as a director of the SBA board.