There is a wide range of materials that can be used to create an effective microbial barrier. The basis of an effective microbial barrier is to ensure that it does not have openings that are large enough for microbes to pass through. Human skin is considered a very effective barrier to microbes. However, it can be compromised. Skin that has a hole, such as a wound, is no longer effective as a barrier and microbes can enter the body through the wound. In addition, mucous membranes — which are similar to skin but thinner and line areas such as the inside of the mouth, throat and urogenital tracts — are less-effective barriers to microbes.

Porosity is used to refer to the amount of empty space in a material.  A non-porous material is an effective microbial barrier because there is no space for the microbes to travel through. However, it is possible to create an effective barrier by putting several layers of porous materials together or controlling the pore sizes of a single layer so that they are too small for the microbes to pass through.

Most molecules in the air are extremely small, consisting of a few atoms. Microbes, although microscopic, are much larger than any gas molecule. Microbial spores can exist as individual entities or clusters, or they can be attached to inert particles such as dust particles. Therefore, many effective microbial barriers can be penetrated by sterilising gases but not microbes.

Filtration theory predicts that materials which are permeable to air and gases employ three mechanisms to remove particles from the air stream: 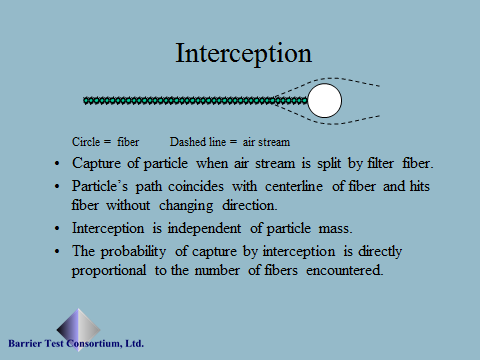 This occurs when a filter fibre splits the air stream that a particle is following.  The particle continues on its original path and collides with the fibre. Interception is therefore a constant particle removal mechanism that is a function of the material’s fibre structure. It is independent of both the particle’s mass and its velocity. 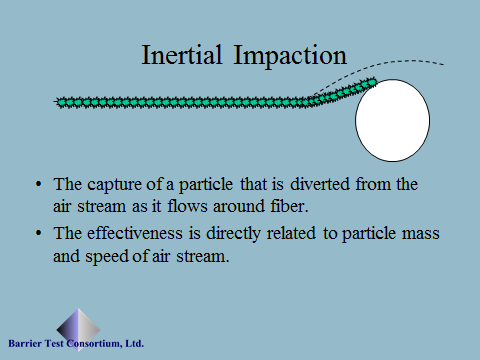 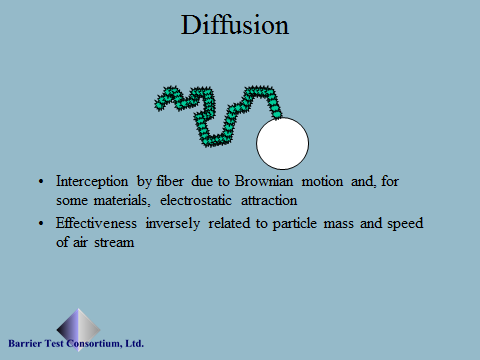 This is the interception of a particle with a fibre as a result of random particle movement (Brownian motion) and, for some materials, electrostatic attraction. The effectiveness of this capture mechanism is inversely related to the mass of the particle and the velocity of the air stream. The lighter the particle and the slower its velocity, the greater the chance of capture.